Frankfurt Guest of Honor Spain: Looking Ahead to 2022

s you may be aware, one of the myriad effects of the coronavirus COVID-19 pandemic has been the postponement by one year of four guest of honor programs at Frankfurter Buchmesse.

Canada, while contributing solid programming this year, will have its fully rendered physical Guest of Honor Canada program on-site in the 2021 trade show. This, then, will be followed by:

And many who are watching final plans fall into place for the digital special edition of Frankfurt Book Fair (October 14 to 18) are impressed with the vigorous and savvy steps being taken by Guest of Honor Spain 2022.

We have two looks at the Spanish organizer’s plans for Frankfurt:

Taking Spain’s Books to the World

Publishing Perspectives readers will recall that in July, the Federation of Publishers’ Guilds of Spain (FGEE) had the support of the Spanish Ministry of Culture and Acción Cultural Espanola (AC/E) to launch its new Books From Spain portal hosted on Frankfurt Rights, the digital rights trading marketplace in which Frankfurt holds controlling interest, with additional investments from Copyright Clearance Center and China South Publishing & Media Group.

Elvira Marco is the project director for the Guest of Honor Spain program at Frankfurt and has been named one of the top 500 most influential women in Spain for three years running.

She tells Publishing Perspectives that Books from Spain now offers international publishers “a selection of 500 titles covering all genres, an incredible selection from all around Spain. The titles on display for rights buyers, she says, are content produced by the gamut of the Spanish publishing industry, “from major groups to independent publishers and agents.

“These titles are available for licensing and are subject to translation support from the specific AC/E Spain 2022 grants as well as the Ministry for Culture. And there are specific sections on Books from Spain for Basque-, Catalan-, and Galician-language titles. All of this is found on the portal, inside Frankfurt Rights.”

At this writing, fiction and children’s and YA books are making a strong showing at the portal. 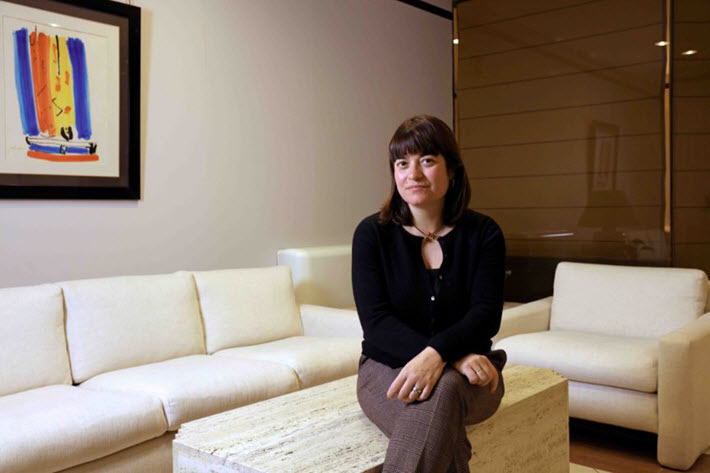 María José Gálvez Salvador, general director for books and the promotion of reading at the Ministry of Culture and Sports, tells us, “Two of the main purposes of the Spanish participation in this year’s special edition of Frankfurt Book Fair is to show the magnificent value of Spanish literature and to raise its visibility in Germany and worldwide.

“We see Books from Spain’s launch as a way to create additional opportunities for publishers, rights directors, and literary agents, with more than 100 Spanish publishers participating. To help encourage translation of Spanish work in world markets, we’re removing obstacles so that the Spanish book industry in all its strength can be present at Frankfurt—helping to prepare the way for 2022.”

Not only is the Books from Spain portal immediately available, making Spanish work more discoverable, but a new translation fund program is also in place, ready, as Gálvez Salvador puts it, “to promote the translation and publication into foreign languages of both classic and contemporary literary works from Spain, content “deemed as outstandingly relevant from a cultural viewpoint.

“We want to spread both Spain’s written cultural heritage and Spanish literature around the world,” she says.

And to that end, here are some points of procedure, in a process for requesting translation funding that the program says has been greatly simplified through the use of digital procedures.

In addition to translation grants, subsidies are available for marketing and publication costs, as well as support for authors to be at international literary festivals. Additional details are available here, and the period of application for the current cycle of grants runs to November 15.

Genres in which translation funding grants are available include:

After the close of the submissions window on November 15, a list of accepted applications should be made available by December 18

A final list of award recipients can be expected January 27.

And Marco has several points to make.

“Spanish,” she says, “is the seventh language of literature translated into Germany. We have more presence for Spanish than that in France and Italy. On the other hand, Spanish publishers are the third leading buyers of German translation licenses.

“We aim to increase the visibility of Spanish literature in the European Union, which is our first market closely followed by Latin American countries.

“The Spanish literary market and our readers are very open to other cultures, as 20 percent of our books are translations, and there’s also an intense exchange with Latin America because we share a language spoken by 500 million people. Many authors are double nationals or residents.

“The languages promoted by this special line of translation grants created for the 2022 Guest of Honor Spain project were defined in agreement with the Spanish Publishers’ Association (FGEE) as German, English, French, Dutch, and Italian. Engagement with publishers from those markets can then help us reach other countries.”

‘Spain: The Road to Books’ Events

With an eye to its coming turn as Guest of Honor Spain at Frankfurter Buchmesse in 2022, the Spanish industry has announced a five-day series of events for Frankfurt 2020 under the umbrella title “Spain: The Road to Books,” in homage to the Spanish journalist and novelist Miguel Delibes (1920 to 2020), whose third novel was the influential El camino (The Road).

Hashtagged #MuchosLibrosPorDescubrir and #ReadAcrossSpain, the program is designed, organizers tell us, “to bring together authors, publishers, and experts to discuss the Spanish literary scene as well as latest trends in publishing, and how the sector envisages the challenges for the book industry in a post-COVID scenario.”

Those interested are asked to register here for access to this sequence of online programming, which is offered free of charge.

There are several sections of the programming envisioned for the week:

Here are some notes on each element.

“Have a Look at Spain” is a program offering facts and figures on the Spanish publishing sector from the 2022 Guest of Honor Spain leadership.
October 15 at 10 to 11 a.m. CEST
Speakers:

Additional offerings are to include 10-minute videos on young adult (YA) literature and emerging writers. It’s expected that professionals from Penguin Random House Grupo Editorial professionals may offer tips and that a session on grants and opportunities for international publishes will be offered, as well.

“Women Write“: Women in Spain read more and they’re also writing more than ever, organizers say, with a very prolific generation of young women writers and award winners at work. This panel discussion  on feminism in the work of a writer will feature:

“Written on Earth“: With landscapes having worked as characters in recent Spanish books, this panel will explore how your surroundings can influence your life and what’s happening, whether you’re looking at a rural life in Spain or an urban setting. The session features two writers discussing their visions of nature and the environment:

YA, comics, crime novels, and poetry: All are to be featured in talks with prominent Spanish authors between October 14 and 18

Young Voices: A presentation of the Spanish Ministry of Foreign Affairs featuring Gabriela Ybarra and Juan Gómez Bárcena in the ministry’s “10 of 30” program.

Panel discussions are planned around the work of two writers for whom 2020 represented a centennial footnote.

Benito Pérez Galdós, the 19th-century  author, died in 1920 about nine months before Miguel Delibes was born. The work of Galdós has been compared to that of Tolstoy and Flaubert for its realism, while Delibes was engaged with issues of nature and ecology, anticipating climate change while opposing censorship as the editor of the newspaper Norte de Castilla.

In the physical BookFest events in Frankfurt, author Fernando Aramburu—whose Patria is the basis for an HBO series about the separatist group ETA—talks with Rosa Ribas about how living outside your own country can influence your writing. This session is called “Written From Afar” and is at the Cervantes Institute Frankfurt, October 16, 7 p.m. CEST

In the BookFest digital lineup, philosopher Danniel Innerarity discusses pandemic-era challenges to democracy with New York-based Marina Perezagua. They’re expected to touch on capital punishment in the United States, organ trafficking, and how they connect in Perezagua’s novel Seis Maneras de Morir en Texas (Six Ways to Die in Texas). Her book, organizers say, has so far been translated into six languages.

More from Publishing Perspectives on the Spanish market is here, more on Frankfurter Buchmesse is here, and more from us on the coronavirus COVID-19 pandemic and its impact on international book publishing is here.

This is an article from our new magazine for the Frankfurter Buchmesse Special Edition, which has news and updates from international industry trends to curated guides to the online events during this year’s Frankfurt Book Fair.

Frankfurt Through a Screen offers you the information you need to make the most of the fair and the rest of 2020.